"An Olympic medal is the only thing that matters"

As a professional BMX racer, Raymon van der Biezen knows the dangers of his sport like no other. Due to the high speeds on the track, physical contact with other racers is always a danger. The road to the Olympic Games in London became a lot longer for the professional athlete from Heesch in October of 2011. During a race in Geneva he broke his wrist in six places. “You only get a few chances to qualify for the Olympic Games. An injury like that endangers your chance to win a medal.”

Van der Biezen took a fall in Switzerland when his team member Twan van Gendt got stuck on a Latvian opponent. Van Gendt hit the ground and took Raymon van der Biezen down with him. “I did not notice it happening and I hit the incline of the first ramp,” Raymond says. “The high speed made me slide up a long way. I knew right away that something was wrong.”

His dream: an Olympic medal. His injury: a complicated wrist fracture. Partly due to the effects of the Ossatec Bone Growth Stimulator, Raymon van der Biezen was able to make it to the Olympic final!

A complicated fracture was discovered in the hospital. A pin and ten screws are needed to keep everything together. “The fracture could not have been any worse,” Raymon explains. “A normal fracture has a recovery time of four to six weeks. In this case, it would be two months before I would be able to get back to training. In the meantime, all you can do is stay positive, look to the future and hope that the recovery goes well.”

To aid his recovery, Raymon van der Biezen had an Ossatec Bone Growth Stimulator attached to his arm. “This device should help the joint heal quicker,” Raymon explains. “An Olympic medal is the only thing that matters.” With only four qualification opportunities remaining, it is very important to get back in shape on time. With the help of his professional athlete’s mentality and the positive effect of the Bone Growth Stimulator, Raymon managed to appear at the starting line of the 2012 Olympics in London. He made it to the finals and ultimately won fourth place. Although he did not appear on the medal podium, he did manage to heal in time to chase his dream – with the help of the Ossatec Bone Growth Stimulator. 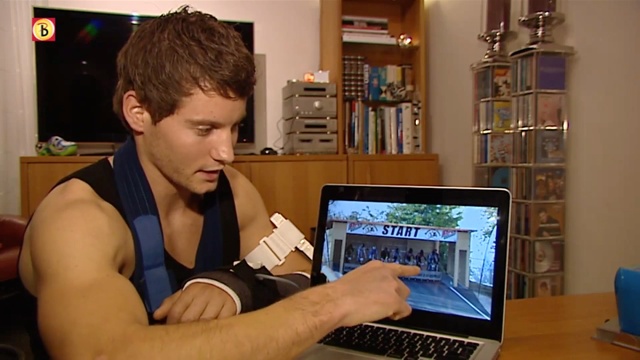